Docs
Back to top

With a Firmware Management license you can, for example:

Only licensed instances will have relevant features. To confirm if you have a Firmware Management license, check the License page (Settings → License, Administrator-only).

What is “managed firmware”?#

Firmware is considered “managed” if it has the necessary product mappings in Catalog so that Hyperview can surface relevant data and metadata. These include mapped firmware versions, installers, and release notes. At a minimum, managed firmware will have a known firmware version.

Note that firmware can only be managed for discoverable physical devices. These include:

How are firmware versions detected?#

Hyperview uses the Firmware Version property (asset → Information → Properties) to store and identify an asset’s current firmware version. Firmware versions are detected in either of the following contexts:

In both contexts, an asset is considered to have “managed firmware” only if the asset’s firmware group is mapped in Hyperview Catalog. (A “firmware group” consists of firmware versions for a specific product model.)

Upon discovery, the Firmware Version property becomes read-only to prevent human error (it automatically gets updated upon rediscovery if the installed version has changed). If you merge two assets with discovered and manually updated Firmware Version values, the discovered value is retained and rendered read-only. In other words, discovered firmware versions are always preferred.

Hyperview features two main Firmware Management pages that can be considered “landing pages” for the feature set. These are:

Why is my Firmware page empty?#

The Firmware grid (Assets → Firmware) only gets populated when there is at least one asset with a firmware version.

In both cases you must have access to the asset records to be able to see them.

The grid will show assets that have a relevant firmware version installed. Note that you must have access to the assets in question to be able to see them.

For Managed Firmware, to look up versions at the firmware group level: * Go to Assets → Firmware → Managed → Details → Versions.

To look up firmware versions for a given asset: * Browse to the asset → Information → Firmware.

Note that the Information → Firmware page will indicate the currently installed firmware version with a green checkmark in the Installed column. 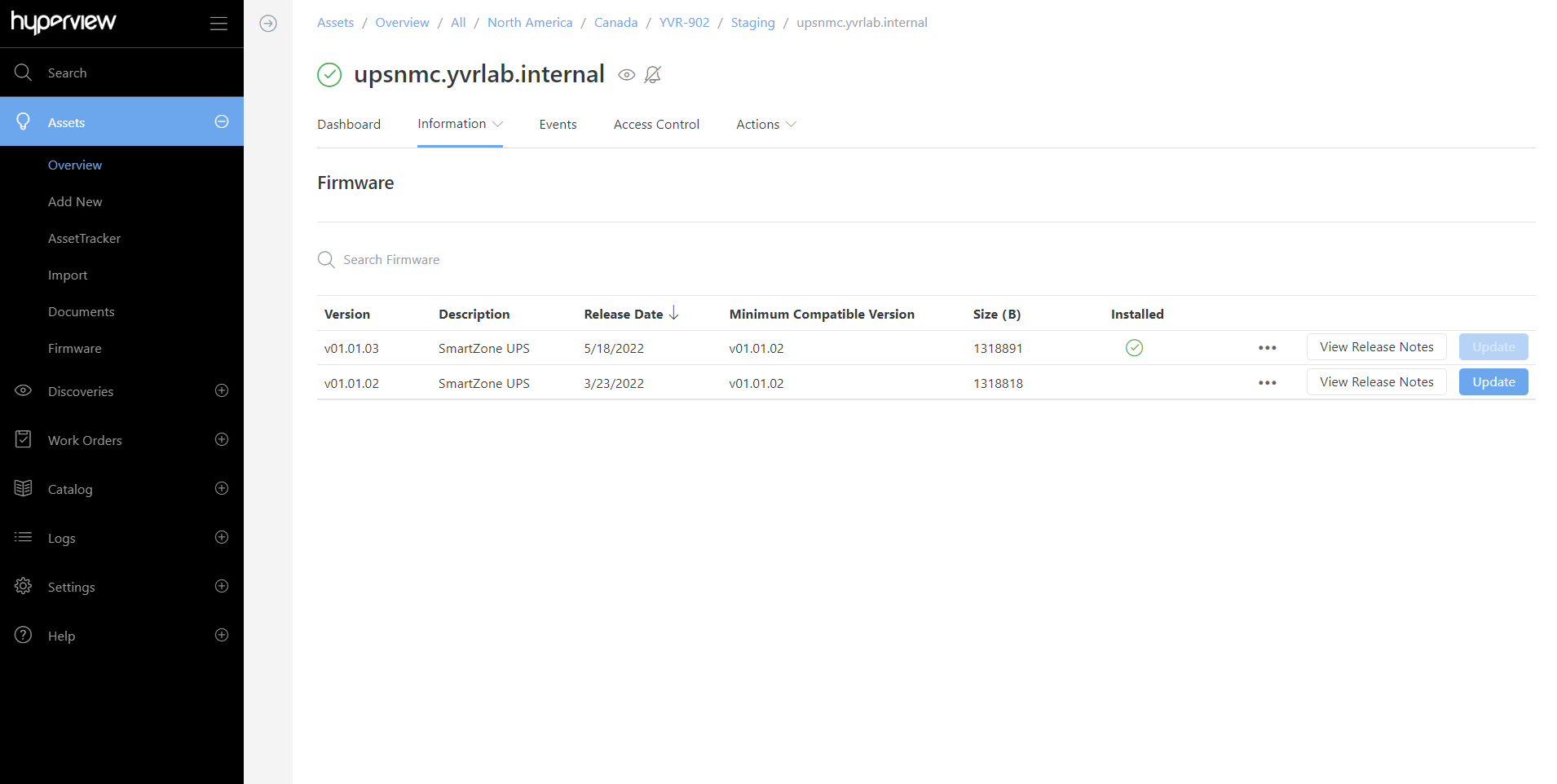 The Unmanaged firmware tab Assets → Firmware → Unmanaged will contain a list of all detected firmware, firmware versions and installations.

The Firmware and Information → Firmware pages both feature Update, View Release Notes and Download Firmware buttons, which allow you to update a firmware version, look up its release notes or download it respectively. 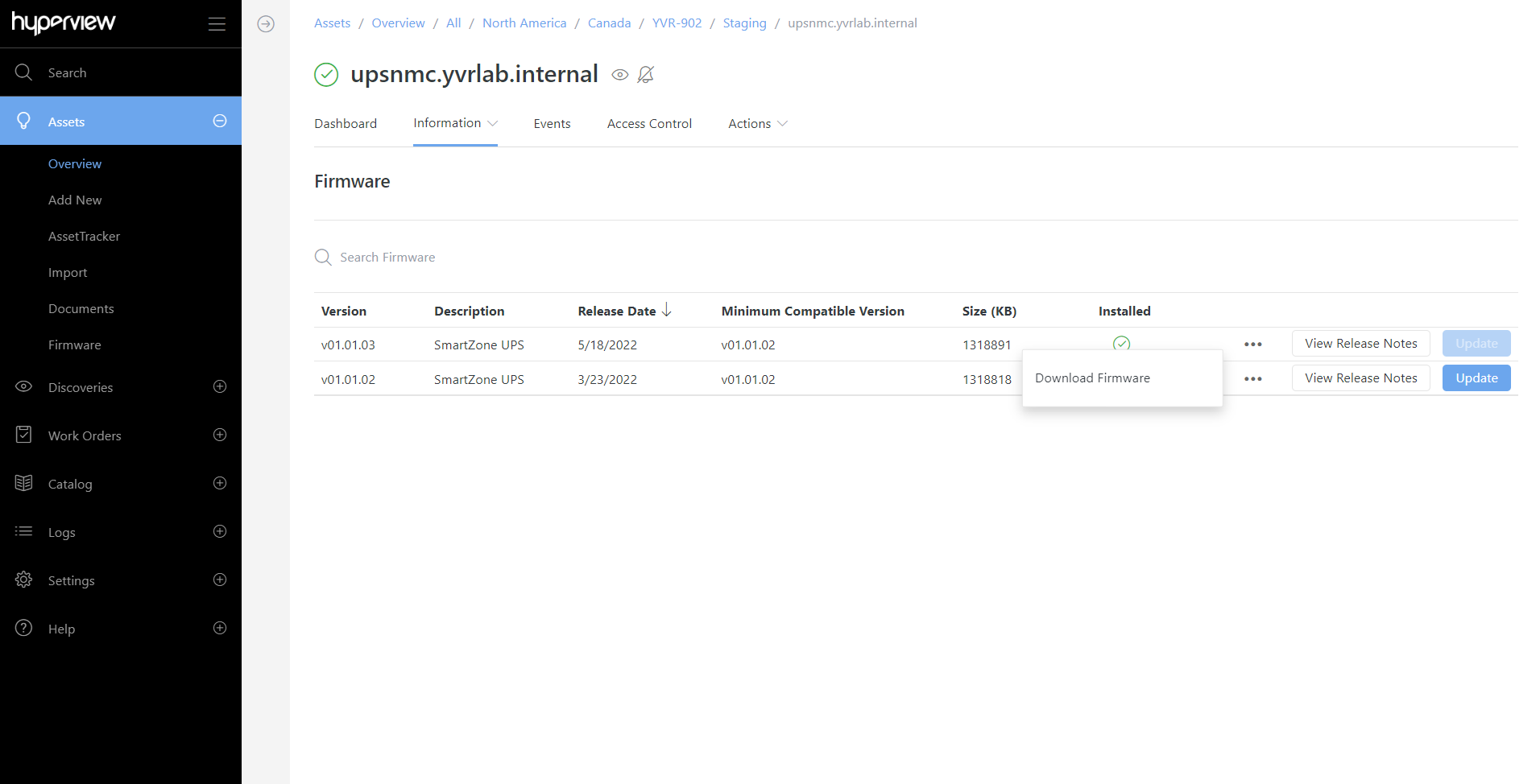 The exact file format of the firmware installer and release notes file depends on the manufacturer. The functions will only be active if the corresponding firmware is mapped in Hyperview Catalog.

An alarm event is generated at the asset level (asset → Events) whenever Hyperview detects outdated firmware (see “How are firmware versions detected?” above). The event stays active until one of the following things happen:

If you upgrade to a later, but not the latest firmware version, the alarm event will be automatically updated to reflect the currently installed version.